(I’ve been on hiatus for the past couple of weeks completing a book, starting a new job, and co-hosting a new television show. But it’s time to get back in the saddle, so to kick off things, here’s a post on one horrendously screwed-up dude.) 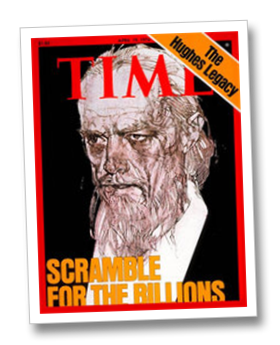 Were I living homeless under a bridge urban troll-like at the time, I still wouldn’t have felt my fortunes had fallen low enough to trade lives with rich guy Howard Hughes during the second half of his life.

While initially acclaimed for his brilliance, good looks, charisma, and adventurous spirit, Hughes suffered from the twin ailments of obsessive-compulsive disorder and having a billion dollars (back when that meant something). This kept him surrounded by yes-men who feared their money-teat might dry up if they ever suggested to the boss that he get treatment.

The wheels on the Hughes express first grew wobbly during this week in 1936 – 75 years ago – when he killed a pedestrian while driving drunk in Los Angeles. A witness claimed that Hughes was swerving and driving too fast and that the male victim was standing in a safe area. By the time of the official inquest, the witness’ story had changed to say that the man stepped in front of Hughes’ car. The charge of negligent homicide was dropped and Hughes ended up spending a total of one night in jail.

July was a particularly bad month for Hughes. In July 1946, nearly 10 years to the day after the fatal traffic accident, Hughes was piloting an experimental aircraft over Beverly Hills when he experienced mechanical failure and tried to crash land the plane at the Los Angeles Country Club. He didn’t quite make it to the golf course, instead clipping three mansions in a fiery crash while sustaining numerous near-fatal injuries.

The accident left him with an addiction to pain killers which only worsened his mental condition. He became more reclusive, buying Vegas hotels so that he wouldn’t have to leave his room. He eventually quit cutting his hair and fingernails, and began saving bottles of his own urine. Over the next 30 years, his eccentricity only deepened, and he became a veritable hermit, seen only by a cadre of Mormon attendants.

By the time of his death in April 1976, Hughes’ physical and mental state had deteriorated so much that he had to be identified by his fingerprints. The 6’4” Hughes only weighed 90 pounds at the end, and the coroner ruled that his death was caused by kidney failure brought on by malnutrition.

In one of history’s great ironies, Howard Hughes, the richest man in the world, literally starved to death.

Here are some other Deadwrite’s Dailies anniversaries to ponder for this week:

Sunday, July 10 – Mel Blanc, the man who gave voice to dozens of classic Warner Bros. animated characters, died on this date in 1989. Blanc was once in a coma from an automobile accident and could only be reached by his doctors when they asked to speak to Bugs Bunny. Blanc answered them in the rabbit’s voice and eventually made a full recovery. He later credited Bugs with saving his life.

Monday, July 11 – Two of entertainment’s greatest – British actor Sir Laurence Olivier (1989) and composer George Gershwin (1937) – passed away on this date. The Gershwin story, helmed by Steven Spielberg, is rumored to be coming to the screen as early as next year.

Wednesday, July 13 – This time of year is historically bad for First Ladies. Both Dolley Madison and Lady Bird Johnson died on this date, and Betty Ford, the widowed wife of former President Gerald Ford, will be buried this week.

Thursday, July 14 – Quentin Roosevelt, the youngest son of former president Theodore Roosevelt, was killed on this date in 1918 during aerial combat in World War I. As hard as it is to now believe, there was a time in America when the children of politicians, even presidents, served in the military.

This was also the date in 1881 when notorious gunfighter William H. Bonney, aka Billy the Kid, was gunned down by his pal Pat Garrett in Fort Sumner, New Mexico Territory. Everybody has heard of Billy the Kid, but I challenge any but the most ardent Old West fan to name any of the names of the 21 men he reportedly killed during his 21 years on this side of the ground.

Freelance writer, film historian, taphophile END_OF_DOCUMENT_TOKEN_TO_BE_REPLACED
This entry was posted on Wednesday, July 13th, 2011 at 9:00 am and tagged with betty ford, billy the kid, dolley madison, george gershwin, howard hughes, lady bird johnson, mel blanc, quentin roosevelt, sir laurence olivier and posted in Polaroids From the Old and New West. You can follow any responses to this entry through the RSS 2.0 feed.
« Carnival of Souls
July Stories »

One response to “Howard the Odd Duck”