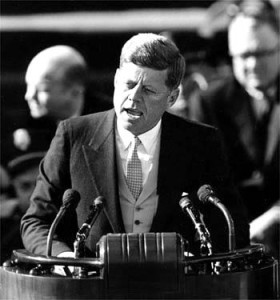 Up in my office there is an unfinished crossword puzzle that is only nine spaces tall and over 21-feet wide. Billed as the “world’s longest,” it is based around the inauguration address of President John F. Kennedy, which was delivered 50 years ago today.

Just as actors are known for how they enter and leave the stage, the landmark events of Kennedy’s abbreviated presidency – the Cuban Missile Crisis, the space program, the Peace Corps, and America’s increased involvement in Vietnam – are being forgotten by the general public, and Kennedy’s administration is increasingly remembered only for the assassination in 1963, and for the speech that got everything going in 1961.

The “ask not” speech is one of the most famous in American history, but if you read the entire text of the address (which you will several times if you ever try to solve the aforementioned puzzle), you will notice an overlooked section that was tragically prescient.

Kennedy, like all presidents, sets the tone for his administration in his address, listing all the things he wants to accomplish during his presidency in vague platitudes. He sums everything up by saying:

January 20, 1961 not only marked the beginning of the Kennedy presidency, but many believe it also can be pinpointed as the day that businessmen in America stopped wearing hats.

The youthful Kennedy donned a top hat as he approached the Capitol building, but later that day he became the first president in history to deliver his address sans lid. Before long, the practice of men wearing hats disappeared.

A New Birth of Freedom

There are some ugly realities littering American history that I just can’t wrap my mind around – one being that less than 100 years before I was born, certain people could legally own other people.

That’s why I find it curious that September 22 isn’t a national holiday, because it was on this day in 1862 that President Abraham Lincoln signed the preliminary Emancipation Proclamation that began the official process of freeing America’s four million slaves.

When the nation was founded roughly “four-score and seven years” earlier, the Declaration of Independence stated that “all men are created equal,” but the economic and prejudicial forces of the time kept these words from applying to the African-Americans that were toiling in forced servitude in the country. The Civil War came about in the 1860s largely to decide whether or not slavery would remain on the North American continent.

The Executive Order that Lincoln signed on this date was more symbolic than binding, as it only freed slaves in areas outside of Federal control. The wording of the document gave the Confederacy a way to re-enter the Union without losing their “peculiar institution.” It was a shrewd move for Lincoln, because he knew the South would never go for it, and by their refusal, he could change the purpose of the war in the eyes of the world. It also set the framework for the official proclamation that was signed by Lincoln 100 days later on January 1, 1863.

The proclamation was largely unpopular in the North where most soldiers were fighting to restore the Union rather than to end the practice of slavery. But internationally, the move doomed the Confederacy’s chance to gain badly needed international recognition.

The advancing Union armies freed more and more slaves after the Proclamation was put into effect, and 200,000 former slaves eventually served in the Union forces.

The shameful practice of slavery was officially ended in America with the passage of the Thirteenth Amendment in December 1865, which came seven months after Lincoln’s assassination.

If he had one, he would have known that to be remembered in the history books, you have to be the first person in history to actually do something and not to simply repeat what has gone on before.

A brief look at the life of Garfield, who died this week in 1881 from an assassin’s bullet, is almost like glimpsing a plan actively set in motion to remain in obscurity.

The pattern began early. He was one of eight men from Ohio to make it to the presidency, and like many before him, he was born in a log cabin. He became a lawyer (lots of those), and served in the Civil War (as did at least four other presidents). Although deeply religious, he was implicated in a financial scandal while a congressman, and was once caught cheating on his wife (nothing new there). He was the fifth man named James to become president and sixteen years after the murder of Abraham Lincoln, he had the sad distinction of becoming the second president to be assassinated. He had only served 200 days in office at the time of his death, which at least gave him the distinction of having the shortest presidential administration ever, right? Nope. William Henry Harrison’s stewardship lasted only a month.

His administration was uneventful, which was hardly his fault, given that it only lasted a little over six months. He was heading off to a vacation on the Jersey shore when he was shot at a Washington, DC train station by a crazed office and publicity seeker named Charles Guiteau.

Garfield could have used better doctors as well.

Modern historians believe that he would have survived had his physicians not given him blood poisoning from probing his wounds with unsterilized fingers and instruments. His physician Dr. Bliss (who curiously had the first name Doctor, thereby being Dr. Doctor Bliss) actually ruptured Garfield’s liver examining the wound. Guiteau, with some justification, claimed in court that “the doctors killed Garfield. I only shot him.” Garfield’s condition steadily worsened, and he died two and a half months after the shooting.

While Garfield seemingly planned for obscurity, Guiteau’s reach was for immortality. He had demanded an embassy post in Paris, and when his request was denied he retaliated by shooting the president. He relished in the attention that the murder gave him and regretted only that he didn’t use a nicer gun since it would have made a prettier museum exhibit. He truly believed that the nation was grateful for what he had done, and planned to run for president himself after he was acquitted. He was found guilty and was hanged a year after the shooting.

Had I had been Garfield’s publicist, I would have made sure that the public knew there was truly an individual under that Gilded Age presidential beard.

And what was unique about Garfield? He was the only president to be ambidextrous.

(I know it’s not a lot, but some guys just don’t give you much to work with.) 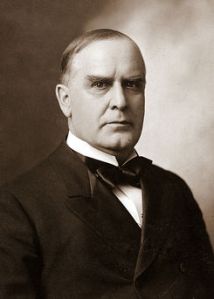 We are all familiar with the tragic events of September 11, 2001, but almost exactly 100 years earlier, America suffered another national tragedy when 25th U.S. President William McKinley was assassinated.

McKinley’s administration bridged the nineteenth and twentieth centuries, which was the time that America became a leading world power. He was the last president to have fought in the Civil War, having enlisted as a private in 1861. During the conflict he was promoted several times by his commanding officer and future U.S. President Rutherford B. Hayes. He left the war with the rank of major and later became a lawyer and served as a U.S. congressman and as governor of Ohio.

He won the presidency in 1896 on the strength of the Republic Party machine. His administration is most remembered for the Spanish-American War – “a splendid little war” – which netted the country Puerto Rico, Cuba, Guam, and the Philippine Islands. Hawaii was also annexed during his tenure.

McKinley easily won re-election in 1900 and traveled to Buffalo the following year to attend the Pan-American Exposition. The exposition was a goodwill festival that was intended to placate the fears of our Latin American neighbors who had just witnessed two of their lands come forcibly under American control.

The Pan-American Exposition's Temple of Music, where President McKinley was assassinated in September, 1901.

McKinley was greeting a line of visitors at the exposition’s Temple of Music when anarchist Leon Csolgolz fired two bullets into the president. Csolgolz was angered over McKinley’s imperialistic and pro-corporate policies. He may have been suffering from mental illness, but we will never know, because in a rush to judgment that is unbelievable when contrasted to twenty-first century practices, Csolgolz was tried and convicted within two weeks of McKinley’s death on September 14, and executed a month later. The Temple of Music, which was a temporary structure, was demolished just days later. Today the site of the shooting is marked by a boulder in the middle of a residential street.

Prison officials feared that Csolgolz’s grave would become a site of veneration for anarchists and hastily buried his body in an unmarked plot after spraying it with sulfuric acid to hasten decomposition. McKinley’s body was interred on a hilltop in his hometown of Canton, Ohio. The domed stone structure was described in Sarah Vowell’s Assassination Vacation (a fascinating and surprisingly hilarious account of visits to the sites of the first three presidential assassinations – JFK’s was too recent to supply levity) as “a gray granite nipple on a fresh breast of grass.”

McKinley’s assassination made a president of former-VP Theodore Roosevelt, who furthered his predecessor’s policy of Latin American imperialism by building the Panama Canal. McKinley is remembered today only in the name of America’s highest peak. This may change if Alaska has its way, as the state has tried for decades to officially rename Mount McKinley back to its Native American name of Denali. This move has been consistently blocked in congress by representatives from McKinley’s former district in Ohio.