Down the Road to Eternity, Part 3 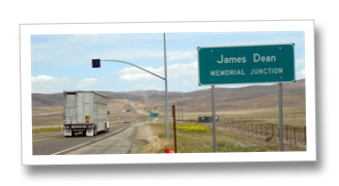 After a stop in Bakersfield for lunch we turn left onto California 46 and head west. We immediately enter farm country and traffic trickles. Its easy to speed on this stretch, even without Dean’s legendary lead foot.

At Corcoran Road, we briefly leave the route to journey north to find another iconic site from the 1950s. It was here at the intersection of Garces Road that Cary Grant was chased by the murderous crop duster in the 1959 Alfred Hitchcock classic North By Northwest. It’s about a 25-mile detour from our trek to take in this site. That’s a long way to go to see an empty intersection made famous in the 1950s, but that, in a nutshell, is exactly what this day is all about.

It’s while returning to Highway 46 that Kim sees the farm that was seemingly lifted from Tatooine. We may not be in the middle of nowhere, but it feels like we could hit it with a rock from here.

Back on the 46, we head west stopping briefly at Blackwell’s Corner to snap photos next to a large billboard of Dean who stopped here briefly to stretch his legs before heading west. His final twenty minutes of life would be spent inside the Spyder.

Minutes later, we crest a ridge of mountains and look below into a large valley. At the base of the valley is the intersection. We’re almost there.

We try to slow down to approach the site at a more safe, and what we feel to be a more reverential velocity, but traffic and inertia speeds us through. We hardly have time to glance up at the green James Dean Memorial Interchange sign that undoubtedly informs many of the passersby of something we have known for years: James Dean died here.

We pass through the intersection and head west for another mile. Near the crest of a hill we see the sign for the non-existent town of Cholame (pronounced Sho-lam), and pull into the parking lot of the Jack Ranch Café. It is here that the faithful traditionally gather. Their totem is a stainless steel monument that bears Deans name, birth and death dates and times, and the infinity symbol. It surrounds a tree that has come to be known as the “tree of heaven.”

I expect to see dozens of Dean fans milling about, perhaps even a replica Spyder or two, but the only people we see are two men in T-shirts and cowboy hats sitting behind several tables of James Dean memorabilia. Their names are Matthew Grant and his father Glen, who live nearby. The collection was assembled by Glens mother who was the postmaster of Cholame for many years.

The collection is impressive with copies of the coroners report, newspaper clippings from the accident, and fan magazines sent from Japan by the Japanese businessman who paid for the memorial. I get excited when they show us a license plate that was found one morning at the memorial that appears to be signed by Elvis Presley. Elvis was a big Dean fan and I try to imagine what something like that must be worth. I calm down when I realize that the relic isn’t authentic when they mention that it was found in 1983 when The King was already long in his grave in Memphis.

I ask Matthew if we missed the crowds and he explains that there weren’t any this year. He estimates that only about a dozen showed up during the whole day. I’m surprised by this, especially since this is the year of the death of Heath Ledger, another talented young actor struck down on the verge of superstardom.

If you wanted crowds, you needed to be here in 2005 on the 50th anniversary, Glen tells us. I counted 325 people that day, he adds.

(I guess even Lourdes has the occasional down day.)

Freelance writer, film historian, taphophile END_OF_DOCUMENT_TOKEN_TO_BE_REPLACED
This entry was posted on Wednesday, June 22nd, 2011 at 8:33 pm and tagged with cholame, crash, james dean, north by northwest, porsche spyder and posted in Polaroids From the Old and New West. You can follow any responses to this entry through the RSS 2.0 feed.
« Down the Road to Eternity, Part 2
The Big Man and The Boss »

2 responses to “Down the Road to Eternity, Part 3”