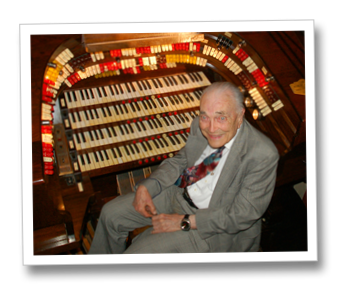 We’re rushing up on the 4th of July again, which means more to me than just a day off. On a high note, the fourth is my birthday, but at the opposite end of the emotional spectrum, it also marks the second anniversary of the passing of our buddy, the legendary organist and choir director Bob Mitchell, who died at the age of 96 in 2009.

The term "legendary" is kicked around carelessly in Hollywood, but that’s the only way to describe Bob. He first tickled the ivories at the age of four way back in 1916, and by the time he was 12(!) he was proficient enough at the organ to accompany silent films in theaters. This gig lasted until the talkies hit the scene four years later. He then became a choir director – a position he held in one fashion or another for the next 80 years!

Along the way he founded the "Robert Mitchell Choir Boys" troupe, which appeared in 100 films, and was the subject of an Academy Award-nominated short.

After a stint in World War II, he returned to Los Angeles and worked for many years as a staff organist for classic radio shows.  In his later years, he returned to his roots to accompany silent films all around the Los Angeles area. This is how Bob came into our lives.

I had been a fan of Bob’s for years, but I had never met him until he agreed to accompany Buster Keaton’s The General for us at our film series in Newhall in 2007. Bob’s star power brought the folks out in droves, and for the rest of his life he played for us in front of packed houses. He would be driven to Newhall by his good friends Dr. Gene Toon and Dee Perkins. Sometimes it would take several minutes for him to go from the car to the organ, but once there, he would transform into a young man.

He would play for the next hour or more, with no sheet music, composing as he watched the screen. Occasionally, he would even sing along to the music, or comment about one of the stars on screen that he had worked with personally over the years. Everyone ate it up.

We got to spend some time together away from the shows. I had a special experience at the end of one year when I drove Bob back to his assisted living home in Hollywood. He was a very caring and religious man, and asked me to stay while he lead Hanukkah prayers for the two of us. Now, neither of us were Jewish, but there we were wearing yarmulkes and lighting candles because Bob wanted to honor all of his friends of the Jewish faith.

Bob had a special love for Kimi and would light up whenever she entered the room (just like me). Kimi gave him a birthday cake at one of our shows while he set at the organ, and Bob hugged her like she was a favorite granddaughter.

It’s ironic to say that the death of a 96-year-old was unexpected, but for me it was. Bob, despite a few health problems, was never in a hurry to leave this life. I asked him if he was interested in playing a show for us on his 100th birthday in 2012, and he said, "Let’s book it!"

But it was not to be. We were on our way to visit him at the hospital last year when we got word that he had passed away.

A year ago at this time, the Los Angeles Conservancy presented the 1924 silent film Peter Pan as part of their "Last Remaining Seats" series at the Orpheum Theatre in downtown L.A. The show was hosted by Leonard Maltin and the near-capacity crowd was treated to a wonderful evening of entertainment. The night was dedicated to Bob who had played for the conservancy for over 20 years. 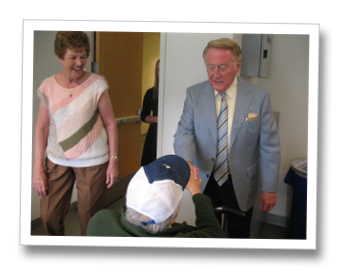 Before the show, a documentary that we made was played in a continuous loop in a side room. It was of the night in 2008 when we took Bob to Dodger Stadium to play the organ for the 7th inning stretch. See, another item on Bob’s resume was being the very first organist at Dodger Stadium when it opened in 1962.

Do you see why the term legendary fits?