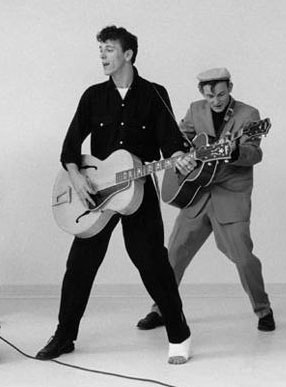 (Since today is the 55th anniversary of the release of the epic rock and roll classic Be-Bop-a-Lula by local legend Gene Vincent, I’ve decided to reprint a two-parter on this underappreciated rockabilly pioneer.)

Sing the following opening lyric without singing any of the rest of the song. Ready? Here goes.

Be honest. You couldn’t stop yourself, could you? Try as you might, some dormant synapse in your brain fired off the second line “… She’s My Baby …” straight to your vocal chords.

Don’t feel bad. Since June 16, 1956 – 55-years ago this week – when Be-Bop-A-Lula first hit the airwaves, so many millions of people have sung along to the tune that it has entered the world’s musical collective unconscious.

While the song may be familiar to most, the story of rock and roll legend and permanent Santa Clarita Valley resident Gene Vincent, the tune’s singer and co-author, who would have turned 76 in February, has largely been forgotten.

If asked to select likenesses for a Mount Rushmore of 1950s rock and roll legends, most Americans would showcase the images of Elvis, Jerry Lee Lewis, Little Richard, Chuck Berry, and Buddy Holly. But another face would likely be added by Europeans where Gene Vincent’s popularity was on par with Presley’s near-godlike following.

Gene Vincent, whose real name was Vincent Eugene Craddock, was born in Norfolk, Virginia in 1935 and began playing guitar at the age of 12. He left school early to join the Navy where he was stationed in Korea. On returning to Norfolk in 1955 he was involved in a very serious motorcycle accident that shattered his left leg, leaving him with a permanent limp and chronic pain for the rest of his life. Legend has it that he wrote Be-Bop-A-Lula in the hospital while recovering from the injury.

During the frantic months after the songs’ release, Gene and his band the Blue Caps – which featured legendary guitarist Cliff Gallup – recorded an album, played numerous concerts, and appeared in the first rock and roll feature film The Girl Can’t Help It, starring Jayne Mansfield. The pace quickly took its toll on Gene and the band and before long several members of the Blue Caps exited for good.

Gene had a few follow-up hits in America after that, but nothing to approach Be-Bop-A-Lula in popularity. With his career stalling in the States, he toured Japan and Australia with Eddie Cochran and Little Richard. Afterwards he went to Europe where he was greeted as a hero by his legions of fans.

Among those fans were some lads from Liverpool.

Paul McCartney wrote in “The Beatles Anthology” that Be-Bop-A-Lula was the first record he ever bought, and in fact, the song was reportedly instrumental in bringing the nucleus of the Beatles together in the first place.

(More on this tomorrow.)