The Greatest Day in Sports History?

If you had to choose just one day from the entire history of American sports to crown as the most memorable ever, a few come immediately to mind.

There’s October 8, 1956, of course, when Don Larsen pitched the only perfect game ever to happen in the World Series.

February 22, 1980 also enters into the conversation. That’s the date of the “Miracle On Ice,” when the upstart American Olympic Hockey team beat the mighty Russians in Lake Placid.

Lots of dates on the calendar can compete as the “greatest ever,” but thanks to what happened in Ann Arbor, Michigan, on May 25, 1935, that date might just be the best sporting day ever.

On that day, 21-year-old track-and-field phenom Jesse Owens set three world records and tied a fourth in the space of only 45 minutes!

During that brief span of time, Owens tied the world record in the 100-yard dash (something he also did when he was in high school!), and set new world marks in the 220-yard sprint, the 220-yard low hurdles, and the long jump (a record that would stand for 25 years!).

Owens was a student at Ohio State University at the time and accomplished this amazing feat at a Big Ten meet at the University of Michigan.

What makes these accomplishments even more astounding were the societal hurdles he had to leap along the way.

As an African-American man, Owens wasn’t allowed to eat with the team in white-owned establishments, and had to work to pay his way through college, as he wasn’t offered a scholarship because of his race. 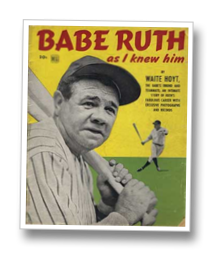 Meanwhile, at nearly the same hour a couple of hundred miles to the southeast, another significant sporting event was occurring … but hardly anyone noticed.

On that day, legendary slugger Babe Ruth, playing for the Boston Braves, hit home runs number 712, 713, and 714 of his career at Forbes Field in Pittsburgh against the Pirates. The last dinger actually cleared the roof of the stadium – the first time that had ever happened.

These would be the last home runs that Ruth would ever hit. No one knew that at the time, and most fans were taken by surprise when the Babe retired abruptly a week later.

Thirty years to the day after these twin events, the date of May 25 would again prove seminal in the history of American sports.

On May 25, 1965, in tiny Lewiston, Maine, Muhammad Ali – another African-American sports hero – knocked out challenger Sonny Liston with what has been described as a “phantom punch” only 102-seconds into their fight.

After flooring Liston, Ali stood over the fallen warrior taunting him to get up. In so doing, he created one of the most memorial photographs in sporting history.