As you may have noticed, “Deadwrite’s Dailies” has been something of a misnomer of late.

I’ve not taken a dirt nap or anything, it’s just that the summer got crazy busy. During the last couple of months, I got deluged finishing up my second book (with co-writer Marc Wanamaker), co-hosting a new local television show, as well as leading tours and teaching classes on film history in the Santa Clarita Valley. On top of it all, Kimi and I started back on the Warner Bros. lot in Burbank doing “real jobs.”

That being said, I found myself with a day off today and wanted to use the time to say “hello” and to congratulate everyone for being alive to celebrate the palindromic date of 11/02/2011.

Today, I would like to update everyone on our efforts to memorialize the spot of the final scene from Charlie Chaplin’s “Modern Times.” This article was originally posted on August 30, 2010. 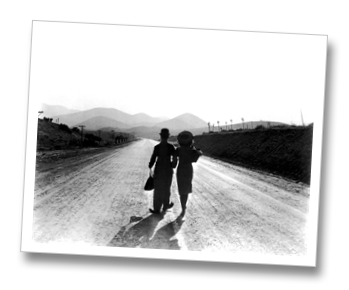 The ending came with little fanfare on Sierra Highway near Agua Dulce, California. The only people on-site to witness the finale were the stars and crew of the film Modern Times, who were there to film the iconic final scene.

Silent films had been on life-support for nearly a decade by the time that Charlie Chaplin, one of the greatest of the Silent Era clowns, chose to make Modern Times – a film about the dehumanizing effects of big business on workers. Sound first appeared in a Hollywood feature in 1926’s Don Juan, which had a backing orchestra and sound effects synced to the film. Talkies debuted a year later with The Jazz Singer, and the days of the silent film were officially numbered.

The change was a traumatic one for Hollywood, and hundreds of careers ended abruptly. Chaplin had built a tremendously successful career with a pantomime character called The Little Tramp and was in no hurry to have him talk. By 1935, he was the last person in Hollywood with the resources to ignore the transition to sound, but he realized the time had at last come to have the character speak.

Modern Times is a transitional film in that almost all of the dialogue is silent, yet there are occasional spoken voices and sound effects. The Little Tramp remains silent for most of the film, but when it comes time for him to talk, Chaplin actually has him sing.

On August 30, 1935, when the cast and crew shot the final scene where Chaplin and his co-star Paulette Goddard walk off into the sunset, (figuratively at least, the scene was set at dawn) they must have sensed they were at the end of an era; it was unlikely that even the great Charlie Chaplin could pull off another silent film. What remained to be seen was whether or not the Little Tramp character would continue.

The answer was no. Chaplin felt the magic of the character disappeared once his voice was heard and chose to retire him.

(A similar character did appear in Chaplin’s next film, The Great Dictator, but the Tramp was transformed into a European Jewish barber for this film. After that, the character never again appeared on screen.)

Modern Times was Chaplin’s biggest gamble and turned out to be one of his greatest successes. Recently, the American Film Institute voted it onto its top 100 American Films list at #81.

I am currently working with Los Angeles County and Santa Clarita city officials to erect a commemorative plaque at the site of the final scene next February to commemorate the 75th anniversary of the film’s release.

Stay tuned for updates on our progress!

THIS JUST IN: In February 2011 Kimi and I helped create and host the first annual ChaplinFest in Newhall, California. During that festival, Tippi Hedren and Leonard Maltin helped us unveil a beautiful black marble monument commemorating the final scene of “Modern Times.” The monument was created by the wonderful couple of Charles and Maria Sotelo of High Desert Monuments in Hesperia, California. These kind and patient people believed so strongly in our project that they created the monument for us without asking for a dime up front. I am very happy to report that after several months of fundraising, the Sotelos are now paid in full! We thank everyone who contributed to this worthy cause. (We will still need to raise funds for the base and other associated costs.)

The next phase of the project calls for us to get the monument placed at the site of the final scene (which looks much the same today as it did in 1935). We are hoping to place it during the week of August 30, 2012, the 77th anniversary of the filming of the scene. We’ll keep you in the loop on how our plans progress.

This was done to commemorate the 75th anniversary of the release of Charlie’s final silent film Modern Times, which was partially shot near Santa Clarita.

Charlie was a young English music hall performer on tour with the Fred Karno Troupe when he was discovered by producer Mack Sennett and given a contract to work in the flickers. He had not yet turned twenty-five when he first stepped through the gates at Sennett’s Keystone Studios near Glendale in January, 1914.

He was immediately thrust in front of the cameras, and on February 2, 1914 made his film debut in a 15-minute comedy called Making A Living where he plays a swindler who gets apprehended by the Keystone Cops.

Less than a week later, on February 7, Chaplin’s “Little Tramp” character debuted in a one-reeler called Kid Auto Races at Venice. Sennett loved to use whatever was happening in Southern California as a backdrop for his hastily constructed plots, and Kid Auto Races was no exception. A soapbox derby race was taking place down by the beach and Sennett hustled his cast and crew to Venice to capture the action. A plot was derived on the site requiring Chaplin to play a camera-crazy spectator at the races who sees the filming and does whatever he can to insert himself in the action.

Chaplin hurriedly assembled a contrasting mélange of oversized and undersized clothing, dabbed on some greasepaint to create a moustache, doffed a derby, grabbed a cane, and just like that, one of the most enduring characters in cinematic history was born fully-grown.

Chaplin appeared in two more films over the next few days, including one that until recently was thought to have never existed.

On February 19, Charlie played a Keystone Cop in a film called A Thief Catcher. It was soon forgotten and all copies were thought to be lost. Chaplin, possibly because he was unsatisfied with the finished product, later claimed that the film had never been made.

A couple of years ago, a film historian was browsing in an antique shop in Michigan when he discovered the long-lost film. (We will be presenting A Thief Catcher, along with Modern Times on February 5 in Newhall as part of ChaplinFest. Leonard Maltin will be hosting a Q&A session with Tippi Hedren before the film. Ms. Hedren, who is most famous for starring in The Birds for Alfred Hitchcock, also starred in Chaplin’s final film, A Countess From Hong Kong in 1967.)

February 5 also proved significant to Chaplin in 1919. That was the day that he, along with film pals Douglas Fairbanks, Mary Pickford, and D.W. Griffith, created United Artists.

It’s interesting that the February 5th “Charlie Chaplin Day” proclamation will be presented in a special ceremony down the hill from the William S. Hart mansion in Santa Clarita since Bill Hart would have been the 5th member of the United Artists team had he not pulled out of the deal at the last moment.

Those who heard it will never forget Jermaine Jackson’s version of Smile, which he sang as a touching tribute to his brother Michael at his memorial service at Staples Center in July 2009.

The song he sang that day is a haunting melody that’s familiar to all, but few know where it originated.

In 1936, multi-talented Charlie Chaplin composed the music for Smile as the theme for his epic silent masterpiece Modern Times. The song is heard during the film’s final scene in which the Little Tramp encourages his crestfallen companion Paulette Goddard to “smile.” The revitalized couple then amble off together down the highway in search of a new day.

John Turner and Geoffrey Parsons added lyrics to the melody in 1954 for Nat King Cole. Since then, it has been covered by dozens of artists, including Michael Jackson on his HIStory: Past, Present and Future, Book I album in 1995. Jackson later said that Smile was his favorite song.

The final scene of Modern Times was in actuality the end of the entire silent era. Chaplin had resisted talkies for a full decade, fearing that once his Little Tramp’s voice was heard, the magic of the character – which had enchanted the world for over two decades – would be gone.

The bittersweet strains of Smile set the proper tone for Chaplin to bid farewell to his Little Tramp character, just as it did for Jermaine Jackson to say goodbye to his little brother.

In February, Kimi and I will be helping host the 2011 Santa Clarita Valley ChaplinFest in Newhall, California to honor the 75th anniversary of the release of Modern Times. The highlight of the festival will take place on Saturday, February 5, when we will place a plaque at the site of the final scene of Modern Times, which was filmed nearby. 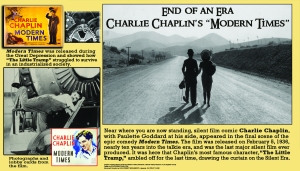