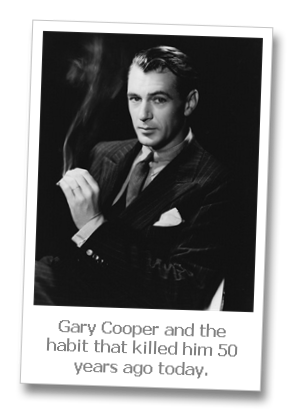 Gary Cooper, who began his career in silent films, became a worldwide star in talkies, despite rarely uttering a word on screen.

The quintessential “strong, silent type,” Cooper made 100 films during a thirty-five year career before dying of cancer 50 years ago today.

Cooper, known affectionately as “Coop,” whose High Noon is considered by many to be one of the best Westerns ever made, was a true child of the West.

Frank James Cooper was born in Montana in 1901 to parents who had immigrated from England. His father was a rancher and attorney who later served on the Montana Supreme Court.

Cooper and his brother were sent to England for several years to get an education, returning to their father’s ranch at the outbreak of World War I. When his parents moved to Los Angeles in 1924, Cooper went with them, and earned a living as an extra. The following year he changed his name to Gary on the suggestion of a casting director who felt he needed a name reminiscent of her gritty native city of Gary, Indiana.

He appeared in several silents, including Wings, the first film to win the Academy Award, and became a star in The Virginian in 1929, which was his first talking film. He would remain a top box office draw for the rest of his life, being nominated for the Best Actor Oscar five times and winning twice.

In the 30s he starred in the classics Mr. Deeds Goes to Town and A Farewell To Arms, becoming a close friend of Ernest Hemingway in the process. That same decade, he famously passed on the chance to play Rhett Butler in Gone With The Wind.

In 1942, he won the Academy Award for Sergeant York, which war hero Alvin York would only authorize if Cooper portrayed him on film.

Cooper won a second Oscar eleven years later in the role of Marshal Will Kane in High Noon, a film many consider to be the genre’s finest 90 minutes.

A lifelong Republican, Cooper addressed Congress during the Red Scare to help root out Hollywood’s alleged communist infiltrators. Although married to the same woman for nearly thirty years, he engaged in a string of affairs with many of Hollywood’s leading ladies.

Jimmy Stewart accepted an honorary Oscar in 1961 on Cooper’s behalf while his friend was suffering from cancer.