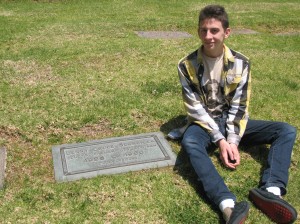 Young comedian Demetri Belardinelli at the grave of his idol, Lenny Bruce.

No, it’s not the start of a joke, but a typical Deadwrite day.

On this particular day, I was accompanied by Demetri Belardinelli, who is the hilarious son of our good friends Charlie and Christina. Demetri, who is only 16, has been doing stand-up in Hollywood comedy clubs for the past year. (Yeah, he’s that good.)

We were at Eden Memorial Park Cemetery in Mission Hills to pay our respects to a couple of the graveyard’s “permanent residents” – legendary funnymen Lenny Bruce and Groucho Marx – who paved the way for later comics, and for future stars like Demetri.

Lenny Bruce was the stage name of Leonard Schneider, who was born in 1925 on Long Island and began his stand-up career after a stint in the navy. His routines were considered so raw for the era that he only appeared on network television six times during his entire career. His stand-up shows were revolutionary, yet led to charges of obscenity. In his later years, drug abuse led to his banishment from most comedy clubs, and he died from an overdose in 1966.

Groucho Marx, the acerbic, innuendo-tossing wise-cracker, was known for his fake greasepaint mustache, bouncing eyebrows, stooped gait, and ever-present cigar. He teamed up with his brothers Chico, Harpo, and (sometimes) Zeppo in hilarious films like Duck Soup and A Night at the Opera. After the team retired, Groucho, born Julius in 1890, became a successful radio and television game show host for many years. In 1974, he accepted an honorary Academy Award on behalf of all the Marx brothers and Margaret Dumont, who was their comedic foil in seven of their films. He made his final television appearance a year before his death in 1977 on a Bob Hope special. 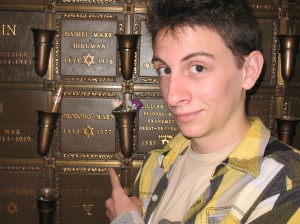 Demetri at Groucho Marx's grave. Groucho once joked that his grave should read, "Excuse me, I can't stand up."

Speaking of Bob Hope, the famous yuckster is interred nearby on the grounds of the San Fernando Mission.

Hope, one of the best-loved and most successful capitalists to ever come out of Hollywood, was as adept at making a buck as he was at getting a laugh, and died a multi-millionaire. Even after death he still rakes it in at his gravesite behind the mission’s gift shop, where the friendly friars charge $2 for a gander at the great one’s grave.