(I originally published this last Halloween, but since today is the 40th anniversary of the death of Tor Johnson, I thought I would dust it off and present it again.) 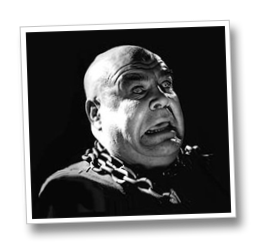 A “tor” is an ancient word meaning “a large pile of rocks.”

Johnson was born Tor Johansson in Sweden on October 19, 1903, just three days before the birth of Curly Howard, another famous screen personality with a shaved head. He was barnstorming the wrestling circuit as “The Super-Swedish Angel” when he first got the attention of Hollywood in 1933 in bit roles where he usually appeared as a wrestler or circus strongman.

Johnson’s acting resume didn’t always elicit giggles. He shared the screen with several of Hollywood’s biggest stars, including Eddie Cantor, Abbott & Costello, and W.C. Fields. He was featured in several A-List productions, including Shadow of the Thin Man with William Powell and Myrna Loy, The Canterville Ghost with Charles Laughton, State of the Union with Katharine Hepburn and Spencer Tracy, and Road To Rio with Bob Hope, Bing Crosby, and Dorothy Lamour.

But it was an appearance in a no-budget production for which Johnson is best remembered. In 1959, Johnson played a zombie, alongside Bela Lugosi and Vampira, in cross-dressing director Ed Wood’s magnum-opus of schlock, Plan Nine From Outer Space – a film widely regarded as the worst ever made (It isn’t. That distinction goes to another of Tor’s films, The Beast of Yucca Flats.)

Since Halloween is coming up in a few days, and Tor’s face was the model for one of the biggest-selling Halloween masks of all time, I thought it would be interesting to take a brief tour of some of Tor’s old “haunts.” 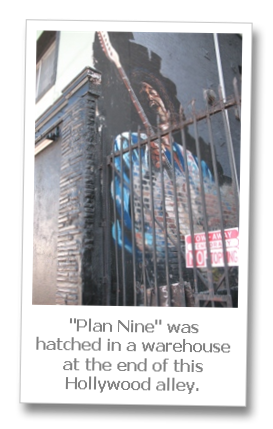 The interiors for Plan Nine were filmed in a warehouse in Hollywood on Santa Monica Boulevard just east of the Hollywood Forever Cemetery. Tor’s home, at 15129 Lakeside Street in the San Fernando Valley city of Sylmar, was used as Bela Lugosi’s house in the film. Also found in Sylmar is the San Fernando Pioneer Cemetery where Lugosi, now as a vampire-zombie, comes back to life.

The Beast of Yucca Flats

This film was made in the Santa Clarita Valley before the Los Angeles metropolitan area had discovered it. It is hard to know for sure, but it looks to have been filmed near the Mystery Mesa area off of Vasquez Canyon Road in Canyon Country.

Tor was laid to rest in plot 177 of Newhall’s Eternal Valley Cemetery after his death in 1971. His stone reads, “Beloved Husband, Father and Grandfather.” This was true. Johnson was said to be a kind man whose “gentle giant” nature contrasted sharply to the monsters he played on film.

It seems this pile of rocks hid a heart of pure gold. 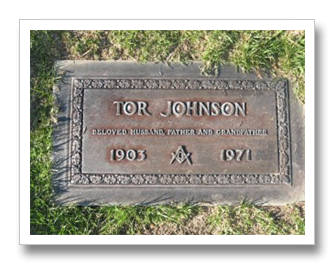 Freelance writer, film historian, taphophile END_OF_DOCUMENT_TOKEN_TO_BE_REPLACED
This entry was posted on Thursday, May 12th, 2011 at 12:23 am and tagged with ed wood, eternal valley cemetery, plan nine from outer space, santa clarita valley, tor johnson and posted in Polaroids From the Old and New West. You can follow any responses to this entry through the RSS 2.0 feed.
« Bob Marley: Third World Superstar
Coop »