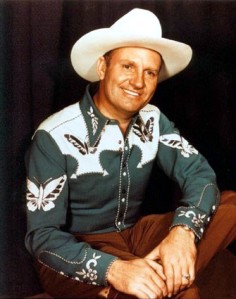 Of all the more than 2400 performers who have been immortalized with terrazzo and brass stars embedded into the Hollywood Walk of Fame, only one has a star in each of the five featured categories of film, television, music, radio, and live performance. Can you guess who it is?

Bob Hope? Nice try, but he only has four stars.

Nope. “The King” has only one star, but the true King of Hollywood Boulevard is none other than the great singing cowboy, Gene Autry.

One of Gene Autry's five stars on the Hollywood Walk of Fame.

Singing Cowby Superstar Orvon Eugene Autry was born on this date in 1907 in the Red River Valley of Texas and grew up on a ranch a few miles to the north in Oklahoma. After high school, Autry worked as a railroad telegrapher during the graveyard shift where young Gene would entertain himself playing the guitar and singing.

Autry signed his first recording contract with Columbia Records in 1929 and later hosted his own music show for four years on WLS-AM in Chicago where he met singer-songwriter Smiley Burnette. Autry’s biggest hits came in the Christmas music category where he struck gold with “Santa Claus is Coming To Town,” “Here Comes Santa Claus,” “Frosty the Snowman,” and “Rudolph the Red-Nosed Reindeer.” He would eventually record over 600 songs – half of which he wrote – and would sell over 100 million records.

Hollywood soon came calling and Autry and Burnette went west to star as singing cowboys in pictures for Monogram, which was later absorbed by Republic Pictures. He made dozens of enormously successful cowboy films over the next twenty years atop his horse Champion, with Burnette often playing his singing sidekick. From 1940 to 1956 he would also host a successful radio show called Gene Autry’s Melody Ranch.

He invested the millions he earned wisely in real estate and broadcasting. He was the long-time owner of L.A.’s KTLA television station as well as of the baseball team that is today known as the Los Angeles Angels of Anaheim.

A recent photo of my film class at the Melody Ranch gates.

Melody Ranch, another former Autry property, is a film ranch located in Newhall, California. Melody Ranch has a history stretching back nearly 100 years, and has been the filming site of thousands of Westerns, including many made by Autry. He was able to acquire it in 1953 and used it daily for film and television production until August 1962 when a brushfire burned most of it to the ground. Autry had intended to build his museum at the ranch, and much of his priceless personal memorabilia was destroyed in the fire. The museum was later built in Griffith Park. For the next three decades the property served as a retirement home for his horse Champion.

In 1991, brothers Renaud and Andree Veluzat purchased the ranch and re-created the Western Town from old photos. It has since been home to dozens of commercials, films, and television shows, including the spectacular HBO series Deadwood. (Fans can get a peek inside the Melody Ranch gates during Cowboy Festival, which takes place every April.)

Autry passed away at the age of 91 on October 2, 1998, just three months after the death of his friend and rival Roy Rogers.

Freelance writer, film historian, taphophile END_OF_DOCUMENT_TOKEN_TO_BE_REPLACED
This entry was posted on Wednesday, September 29th, 2010 at 12:01 am and tagged with cowboy festival, early warner bros. studios, gene autry, hollywood walk of fame, melody ranch, Newhallywood, newhallywood on location, westerns You can follow any responses to this entry through the RSS 2.0 feed.
« The Final Swing
The Church of Cholame »

One response to “The Grand Ole Autry”